BIRDQUEST > 39 YEARS AND COUNTING – BIRDQUEST TALES FROM THE FIELD: Number 1

39 YEARS AND COUNTING – BIRDQUEST TALES FROM THE FIELD: Number 1

I first travelled with Birdquest in 1982 to Israel, followed by Poland a few years later. In 1989 I joined them in Peru, an incredible trip with wonderful scenery, history and culture as well as birds. I was now hooked and I’ve travelled with them every year since, occasionally as many as five times in a single year. I’ve now reached the total of 79 Birdquests (which would have been over 80 had it not been for the recent pandemic travel disruption). 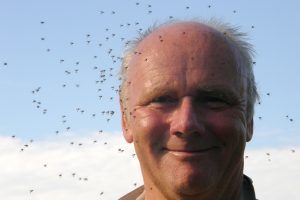 Of course, the vast majority of trips can be summarised by saying; ‘our leader took us round to some wonderful sites, we saw loads of birds really well, the food was great and the accommodation comfortable’. A great experience and just what you wanted, but nothing to tell the friends and family back home, who might not be interested in the fact that you had gripping views of an undescribed species of tapaculo! The fact is the most interesting tales are of times when things went wrong (well, not seriously wrong, that hardly ever happens, but wrong enough to disrupt the flow of the trip) and how the leader and the group managed to right the situation.

Transport used to be a problem but drivers now always turn up on time, which wasn’t always the case 30 years ago (‘they can’t possibly mean pick us up at 6 am, they must mean 8 like all the other tourists do’) and vehicles are mostly reliable. However, there are exceptions. My first trip to South Africa saw all three minibuses needing replacing for a variety of reasons and we had something like 18 punctures. In Colombia the bus we were given was so poor that while driving up a hill to Medellin’s airport we were overtaken by a guy on a bicycle! On my first visit to Madagascar we turned up at an airport on the back of a coal lorry due to our bus breaking down and on the second visit whilst driving up a rough track to a campsite the supply vehicle, it’s locally resourced replacement and one of the two 4x4s containing the clients all broke down. We arrived at the campsite at dusk squeezed into one vehicle with no luggage, tents, sleeping bags or food. Fortunately, they got one vehicle going and it turned up about 10pm with all the gear. It was all worth it, the next day we saw Madagascar Pochard, Red Owl and Slender-billed Flufftail!

Road blockages from natural causes can be a problem but man-made ones more so. Again, in Colombia, many years ago, some youths with a grudge against local authorities decided to hi-jack a bus and used it to block the highway and then punctured the tyres. Whilst waiting it out someone saw a Glaucous Tanager, a lifer for some, so of course we pursued it. On our return we found most of the other vehicles gone. Realising that another truck was being used to block the other end of the village they had got out as soon as possible. We were now stuck, the only option was to carry our gear through the blockade and try and find a driver to take us back to base. Our minibus with local rep turned up six hours later and the local rep was furious that she had been left behind!

A similar situation occurred in Venezuela (also many years ago when we could still go there) but this time we were on the way to the airport for an internal flight to Caracas before the flight home. The leader tried to argue with the protestors but they said ‘let your clients enjoy a few more days of Venezuelan hospitality’. One of the clients had a nervous twitch and it was suggested that we claim he needed urgent medical attention. One of the clients, a doctor, said that would be breaking his Hippocratic Oath, another doctor, a well-known Birdquest client, said ‘well it doesn’t break mine!’ and marched the poor fellow off to face the protesters. Unfortunately they replied ‘you passed a hospital 10km back, turn around’. Eventually we abandoned our bus and driver, carried the luggage through the blockage and continued to the airport on the back of a flatbed truck that was hired on the other side of the barrier.

Some Birdquesters are lucky and have a birding spouse, others either travel alone or take their non-birding spouse with them and hope they enjoy it. Years ago, I took my then girlfriend to Kazakhstan, she enjoyed most of the trip and was quite taken by the romantic notion of spending a couple of nights in the desert in yurts. It had been a hot morning and after lunch we had an hour or so to spare. We lay on our camp beds to rest, not exactly au naturel, but with minimal clothing, when the wind increased sharply. I opened my eyes to see blue sky; the yurt, my partner and her camp bed lay in a tangled heap 50m away. We had been hit by a mini tornado that had wrecked our yurt but left the other two, only feet away, unscathed. She wasn’t hurt, but very embarrassed. I’m not saying that was the reason we split up a few months later, but it certainly didn’t help!

The degree to which the group interacts with locals varies from trip to trip, sometimes you only get to speak to hotel staff, the driver and local reps/guides. Decades ago the average age of the clients was lower and some of us wouldn’t turn in early but visit local bars or even night clubs after the meal/log when the opportunity arose. In one bar in South Africa we were minding our own business when a group of Afrikaners criticised us for not joining in with their sing-song. We not only joined in but out sung them with everything from a Swedish drinking ditty to the ‘lobster song’.

Of course, the leaders deserve a mention, they’re all great birders, they wouldn’t get a job with Birdquest if they weren’t. Of all the leaders I’ve travelled with the most eccentric was the late Paul Coopmans. He had a total mastery of Neotropical bird vocalisations and in the days before iPods and MP3 players he carried two tape recorders, a microphone and a huge bag of cassettes everywhere. The speed with which he could move from one bird song to another using cassettes was astounding. He was also a coffee addict and carried a large coffee flask at all times. When entering the forest to tape in a bird the group would often emerge on the road hundreds of metres away, and would then have to search the verges to find his coffee mug! Once in Venezuela we checked into a nice hotel after several nights of basic accommodation. Paul had been sorting out paperwork in the bus and still had a head torch on. He checked us into the hotel still with his wellies on, tape recorders, cassette bag and scope over his shoulder and head torch on. The receptionist kept a straight face. Tragically Paul is no longer with us but he is still greatly missed.

Occasionally our activities attract the attention of the local law enforcement. We needed permits to bird in Gola East forest in Sierra Leone but the office issuing the permits was on the far side of the park and we had to drive through it to collect permits. As soon as we entered the park we were arrested for ‘engaging in activities in a protected area without a permit’. It seems we were caught up in a vendetta between the park management and the local tour operator. Eventually all was resolved and someone was dispatched on a motorbike to collect permits. More recently we had a heavy police presence on a trip, the Algerian Nuthatch expedition. We knew that we wouldn’t be allowed to use binoculars or scopes (they were left behind in a hotel in Tunisia) but didn’t realise that we needed a police escort at all times. As we birded the beautiful forests we seemed to gather more and more guides and hangers on and by the time we returned to our minibus we had acquired the occupants of six police cars, plus two nuthatch researchers, three forestry officials, a local reporter and a photographer!

I’ve had many adventures with Birdquest, most of them amusing, a few challenging but all so worthwhile and I do hope that I have many more.

39 YEARS AND COUNTING – BIRDQUEST TALES FROM THE FIELD: Number 2