BIRDQUEST > 39 YEARS AND COUNTING – BIRDQUEST TALES FROM THE FIELD: Number 2

39 YEARS AND COUNTING – BIRDQUEST TALES FROM THE FIELD: Number 2

by Dave and Sue Williamson

Just like Ian Lewis, my wife Sue and I have been Birdquesting for a long time – our first was to Turkey in 1985 and our most recent one, to Vietnam just before the pandemic broke in 2020, was number 91. The main reason for doing them is of course to see the birds particularly those more remote and difficult-to-see species. On top of that we love the amazing travel experiences that go with them – birding trips do of course take you to places and situations that ‘normal’ holidays would never even dream of! 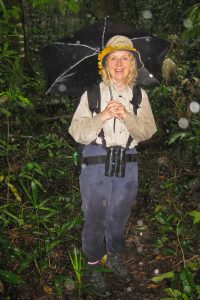 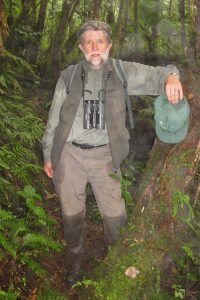 A classic example of this was the Birdquest to Arctic Siberia in June 1992. This involved travelling to Moscow and then on to Magadan in the Russian Far East, complete with someone’s Alsatian dog running up and down the central aisle of the plane for 8 hours! Once there, we were soon boarding a large orange Russian helicopter for the first of many such flights during the tour. This first one to Talan Island to see the colonies of Horned and Tufted Puffins, Parakeet and Crested Auklets and nesting Steller’s Sea Eagle. The Russian pilots were Afghan vets and looked the real ‘Top Gun’ with their shades and leather jackets. Mark Beaman sat up front to direct the birding proceedings and I remember on returning from a fast, low-level flight asking him why we’d done so much swerving around – to avoid the Tundra Swans apparently!  On arriving at our next stopover, Anadyr, we found that Aeroflot had cancelled our flight onward to Provideniya, the most easterly town in Asia. Mark was determined not to be foiled by this and we watched as he marched off across the airport past all the MiG jet fighters. When he reappeared out of one of the hangars he told us to grab our bags and the next thing we knew we were climbing up the boarding ramp and taking our places on the webbing seating of a Russian troop carrier! At Provideniya we transferred to our ship for our voyage up the Bering Sea enjoying Ivory Gull and Grey Whales and stopping for close-up encounters with breeding plumage Spoon-billed Sandpipers and Emperor Geese. The final stages of the tour found us up on the Kolyma River by the Arctic Ocean, first at a camp in the forest with our own pair of resident nesting Great Grey Owls and a food freezer consisting of a hole dug into the permafrost. Luckily our two Russian cooks Tanya and Lenya made the best doughnuts known to mankind. Finally, we went up to the edge (literally!) of the Arctic Ocean based in a large wooden hut. We had nesting Spectacled Eider just outside the hut, White-billed Divers on a nearby frozen lake and hundreds of phalaropes all around us. The helicopter pilots would take us and land anywhere from mountain tops to tundra bogs. On our last full day up there, we only had 2 minutes spare fuel left when a pair of Siberian Cranes were spotted and so we landed at a safe distance and were delighted to find a colony of nesting Ross’s Gulls there too. 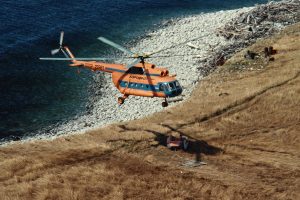 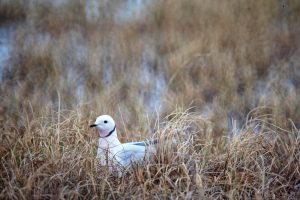 Every world traveller and birder want to visit Antarctica at some time in their life and our first opportunity came in the form of the Antarctica, the Falklands and South Georgia tour in 1998. We were on the Akademik Shuleykin, one of those wonderful little ships built in the 1980s in Finland for the USSR, originally for Oceanographic Research (or surveillance?) and converted into an expedition ship.  With only 43 passengers, all of whom were booked through Birdquest, everyone soon got to know each other and it made for a very friendly and enjoyable trip, once everyone had got their sea-legs the small bar was certainly packed and noisy every evening! (One of the ladies, Mo, who liked a G&T or two and so ran up quite a tab voted the ‘Great Bar-bill’ as her bird of the trip!). We’d never experienced anything like this before and I remember standing on the deck above the bridge as we headed out, into the Southern Ocean with a Force 8 hitting us at an angle on the stern and making us corkscrew dramatically through the massive swells. As we dropped into each huge hole to be surrounded by a wall of water I did actually think ‘this is it – I am going to die’.  However, we soon gained confidence in our trusty little ship. We were particularly fortunate in having a very proactive Expedition Leader, Geoff Green – if it was possible to do it then we did it! Despite being at sea for just about half of the 19 days cruise we still managed 14 landings.  One of the most memorable of these was at Baily Head on the eastern edge of Deception Island. In contrast to the calm inside the flooded caldera of the island the steeply sloping black volcanic sand beach and exposure to some intimidating swells make the Baily Head landing one of the most notorious and challenging on the Antarctica circuit. There was a considerable swell on the ocean that day but Geoff soon decided we were going for it. It’s all in the timing – each Zodiac had to wait for the right wave and then full throttle all the way in and up the beach. Happily, we all survived in a cold, wet sort of way although one lady fell in and was quickly pulled out – it took a little longer to find one of the Russian crew who had disappeared under the Zodiac in the waves but he bobbed up like cork and was fine. We were rewarded with a climb up to the spectacular colony of over 100,000 pairs of Chinstrap Penguins! 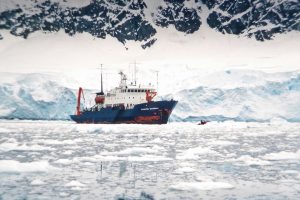 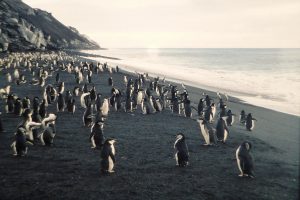 Another epic was the 2010 tour to French Polynesia, Pitcairn and Henderson. With almost 20 hours flight time to get there we thought Tahiti was a long way away but to journey on to Pitcairn Island took us another 2 flights totalling 5 hours and then a further 2 days sailing! It is after all one of the remotest islands on earth at over 5000 kilometres from the nearest continent. Initially we were a little concerned at the sight of our slightly rusty vessel the Claymore ll but she proved to be a very comfortable ship with excellent viewing for sea-watching and a great crew. Pitcairn is a place with a somewhat chequered history, including of course the Mutiny on the Bounty, and to visit was rather a surreal experience. A third of the inhabitants have the surname Christian and amongst other relics from HMS Bounty her anchor is on display outside the Public Hall. From a wildlife point of view, it boasts the endemic Pitcairn Reed Warbler and the world’s most widespread dragonfly, the Wandering Glider – how did they get there?  Henderson Island in the same group was amazing with its four endemics including our favourite the flightless Henderson Crake. Let’s hope the next attempt to eradicate the Polynesian Rats works. Oeno, the local ‘paradise’ island, had a fantastic selection of nesting seabirds and en route back we visited Teneraro where our key targets were the stunning Polynesian Ground Dove and the amazing little Tuamotu Sandpiper – the latter wasn’t too difficult with the first ones running down the beach to meet us! 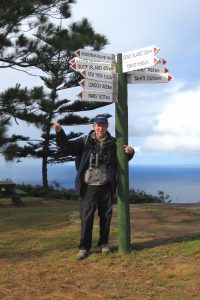 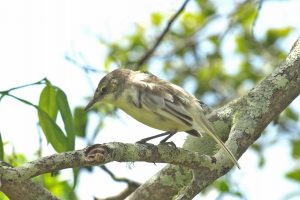 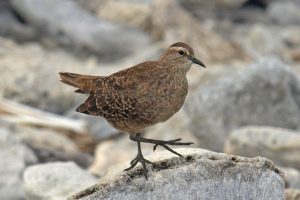 The Colombia: from the Choco to Amazonia tour in 2016 seemed to have a bit of everything, but one of the highlights was our expedition to see amongst other rarities the endangered Dusky Starfrontlet, at the Colibri del Sol Reserve in the Andes west of Medellin. This involved climbing a long way up the mountain to the paramo habitat and so horse power had been arranged to assist the ascent. We arrived in the dark pre-dawn to find there weren’t enough horses for everyone so Pete and Richard decided to walk. Never having ridden a horse before I climbed into the saddle with some trepidation. There were no proper reins but just a rope coming from the front end of the horse to steer with. Despite this my horse immediately set off downhill i.e. in the wrong direction! It took me 200m or so to turn it round and then off we went. The horses stumbled on the rocks in the dark but luckily, we couldn’t see the drop over the cliff to our left. Sue’s horse was clearly top of the pecking order as if another horse was foolish enough to overtake it was bitten firmly in the backside! At one point, Harry’s horse decided it had a better idea and it suddenly charged off – we didn’t see Harry for some time but apparently it had taken him to a hacienda that it clearly rather liked. It soon got light and after a couple of hours we reached a meadow where my horse decided without warning to roll over – with me on it! I transferred unscathed to a large, sturdy mule and shortly afterwards we caught up with Pete who now had a horse – unfortunately for him it loved riding ‘off-piste’ and particularly enjoyed low branches, meaning Pete had to perfect his limbo dancing whilst on horseback.  We were hysterical with laughter but managed to get to the top where on dismounting we wondered if we would ever walk again. Nevertheless, when asked if we’d like to ride back the answer was a resounding ‘no way!’.  Needless to say, it was all well worth it, the paramo was magical, we saw all our target endemics and best of all the ‘Colibri del Sol’ hummingbird was spectacular. 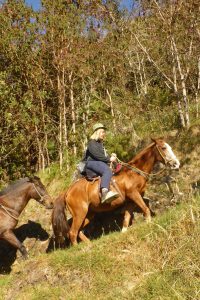 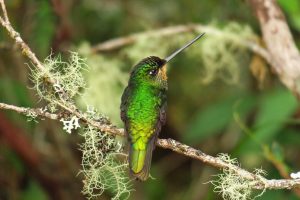 Can’t wait for the next one!

39 YEARS AND COUNTING – BIRDQUEST TALES FROM THE FIELD: Number 1