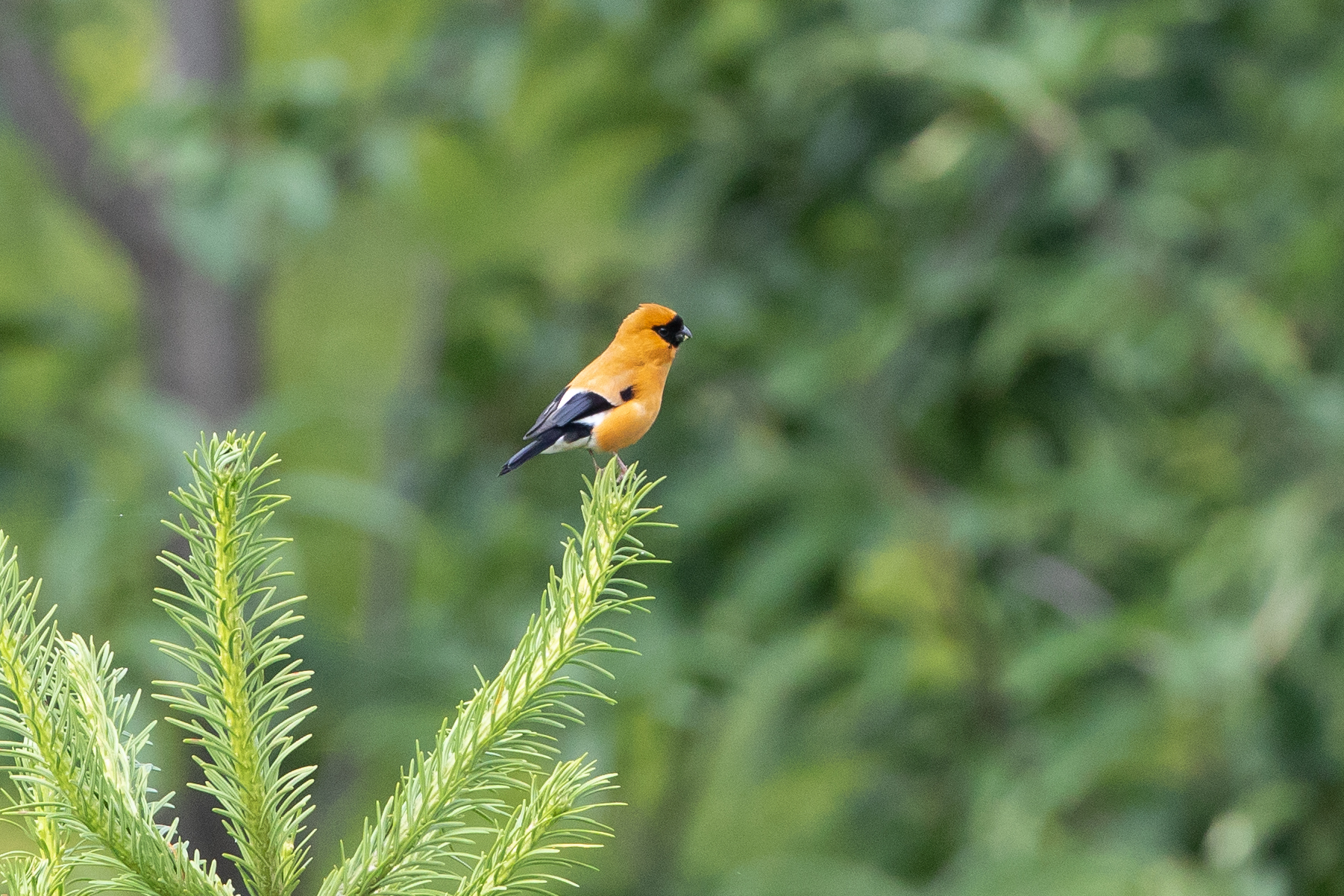 Orange Bullfinch is endemic to the Western Himalayas, but only relatively easy to find in Pakistan (image by Inger Vandyke)

Orange Bullfinch is endemic to the Western Himalayas, but only relatively easy to find in Pakistan (image by Inger Vandyke)

The Western Himalayas is one of the most dramatic regions of the Himalayan realm. The region is dominated by the mighty Indus, which rises in the dry and cold of the Tibetan Plateau before entering the Himalayan ranges and powerfully coursing its way through to the Indian Ocean, encompassing almost all of the Western Himalayas and their surroundings in its vast watershed.

This is the meeting place of three of the highest mountain chains on the planet, the Hindu Kush, the Karakoram, and the main Himalayan range. Immense, serene and spectacularly beautiful ice-clad summits dominate the landscapes, culminating at 8611m at the summit of K2, the second-highest mountain on earth.

Where both invaders and peaceful travellers formerly had to endure great privations to traverse these valleys and mountains, we are now able to drive with comparative ease, thanks to the remarkable Karakoram Highway that links Pakistan with China. An exploration of the Western Himalayas with their breathtaking scenery, splendid selection of endemic and near-endemic bird specialities, and good access provided by the great engineering feat of the Karakoram Highway is a natural choice for the adventurous birder with a love of mountains.

While the Western Himalayas may not possess the avian diversity that the Eastern Himalayas have, there are a good number of species that are endemic to, or mainly restricted to, this region, and it is these specialities that we shall be concentrating on.

We begin our Pakistan birding tour at Islamabad, the capital city of Pakistan that was built in the 1960s on virgin land close to some productive birding areas. Here we will look in particular for the endemic White-cheeked Tit, as well as such other specialities as Slaty-headed Parakeet, Scaly-bellied and Brown-fronted Woodpeckers, and Black-headed Jay.

From Islamabad, we shall drive up into the Himalayas. Our first experience in the mountains will be in the Kaghan valley region where we shall search the forests for such West Himalayan endemic or near-endemic specialities as Himalayan Woodpecker, Variegated Laughingthrush, White-throated Bushtit, Rufous-naped and Spot-winged Tits, Kashmir and White-cheeked Nuthatches, Black-and-yellow Grosbeak, Spectacled Finch and the fabulous Orange Bullfinch (now a tricky bird to find away from Pakistan). Restricted-range breeding specialities with limited winter ranges include Tytler’s and Brooks’s Leaf Warblers, Western Crowned Warbler and Rufous-tailed Flycatcher.

Next, we will travel up the famous and spectacular Karakoram Highway to Gilgit, set deep in Pakistan’s ‘Northern Areas’, and search the high valleys for the breeding-endemic Long-billed Bush Warbler and also the restricted-range Larger-spotted Nutcracker and Blyth’s Rosefinch.

Pakistan is surely one of the most friendly countries on earth. It is quite out of the ordinary. Indeed taking selfies with every foreign visitor seems to be a national sport! There is an issue of terrorism in Pakistan, as there is in Indian Kashmir, but this is a  very big country and attacks are mostly localised. The Kaghan Valley, the Naltar Valley and the vicinity of Islamabad that we visit are all considered safe areas. Owing to the rather generalised travel warnings issued by some governments for Pakistan, your normal travel insurance may not be valid and in that case, you may want to contact a specialist provider.

Birdquest has operated Pakistan birding tours to the Western Himalayas since 2001.

In 2022 this tour can be taken together with AFGHANISTAN EXPEDITION

Accommodation & Road Transport: The hotels are mostly of good or moderate standard, occasionally fairly simple. Road transport is by small coach and roads are variable in quality.

Walking: The walking effort is mostly easy to moderate, but there are a very few optional harder walks.

Climate: Hot in the lowlands, but cool to warm at higher altitudes. The weather is mainly sunny at this season but overcast conditions are not uncommon and some rain could occur.

Bird Photography: Opportunities are quite good.


The single supplement will not apply if you indicate on booking that you prefer to share a room and there is a room-mate of the same sex available.

Air Travel To & From The Tour:  Our in-house IATA ticket agency will be pleased to arrange your air travel on request, or you may arrange this yourself if you prefer.

Northern Pakistan: Day 1  Our Pakistan birding tour begins this morning at Islamabad airport. We shall be staying at the clean and well-designed political capital of Pakistan for two nights. Later we shall begin our exploration of the area.

Northern Pakistan: Day 2  During our time at Islamabad, we shall visit two very good localities, the Margalla Hills that stretch along the northern edge of the city and Rawal Lake which is surrounded by subtropical woodland. The avifauna is mostly typical of the Indo-Gangetic plain although the foothills provide a certain montane influence.

The star attraction of the area is the uncommon and very localized White-cheeked Tit (a species now virtually endemic to northern Pakistan). Other good birds include Brown-fronted Woodpecker, Slaty-headed Parakeet and Black-headed Jay (all endemic to the western Himalayas), Scaly-bellied Woodpecker (which also extends into Central Asia) and Rufous-fronted Prinia (a species restricted to the arid regions of the Indian subcontinent).

Northern Pakistan: Day 3  After some early morning birding in the Islamabad area if need be, we will drive northwards into the Kaghan valley for some Western Himalayan forest birding, pausing in drier parts of the valley to look for European Roller and White-capped Bunting.

Eventually, we will reach the Kaghan valley, where we will stay for four nights at an altitude of over 2000 metres.

Northern Pakistan: Days 4-6  The Kaghan valley possesses a wide range of altitudes and habitats ranging from the valley floor at about 1500m to the high alpine slopes at over 3300m. After the heat of the plains, the cool mountains will come as a very pleasant relief.

We also have a very high chance of finding the uncommon and sometimes elusive Orange Bullfinch, which is restricted to a small area of northern Pakistan and adjacent Kashmir. We have never missed it on our Pakistan tours!

If we are lucky we will encounter Koklass Pheasant, Upland Pipit or Chestnut-eared Bunting.

We shall also ascend on jeep tracks to the high pastures, where we will have access to open areas, scrub and high altitude forest set amidst a fantastic panorama of spectacular, snow-capped peaks.

Himalayan Monal is not uncommon in the area, but very shy due to hunting, and so we will need to be lucky to enjoy views of this impressive pheasant.

Northern Pakistan: Day 7  After some final birding, we leave the Kaghan valley, crossing a high pass to the Indus valley where we join the famous Karakoram Highway. Only completed in the 1970s, this engineering feat cuts through some of the world’s most spectacular mountains and extends for 1200 kilometres, right up to Kashgar in western China.

We make our overnight stop at a pleasantly situated motel on the banks of the Indus at Besham, close to the place where Alexander the Great crossed the river in 327 BC.

Northern Pakistan: Day 8  We continue driving northwards on the Karakoram Highway today, enjoying the incredible scenery and stopping in the vicinity of Chilas in a hot dry zone where we will look for Hume’s Wheatear. Other species we may find on the way include Booted Eagle, Eurasian Hobby, Alpine Swift, European Bee-eater, European Roller, Eurasian Crag Martin, Blue Rock Thrush, Variable (or Eastern Pied) Wheatear, Jungle Myna and the interesting migratory race bactrianus of the House Sparrow.

There are often spectacular views of Nanga Parbat, the ninth highest mountain in the world at 8126m. Eventually, we will reach the town of Gilgit. Gilgit is the main market town in the ‘Northern Areas’, at the crossroads of several mountain trade routes, both ancient and modern.

Finally, we travel the short but steep and spectacular road up to the Naltar valley at 2800m for a three nights stay.

Northern Pakistan: Days 9-10  The Naltar valley is a surprisingly verdant high valley, in striking contrast to the arid Indus gorge at Gilgit. Here we will be looking in particular for the localized Long-billed Bush Warbler, a species which is restricted to the interior zone of the Western Himalayas and which here frequents the scrub adjacent to the areas of cultivation.

Other specialities restricted to the Western Himalayas (and the mountains of Central Asia to the north) include Sulphur-bellied Warbler, Mountain Chiffchaff, Larger-spotted Nutcracker and Blyth’s Rosefinch, and amongst the attractive alpine scrub-forest we should also find Grey, White Wagtail (of both Masked and Himalayan forms), Black Redstart, Pied Wheatear, Mistle Thrush, Lesser Whitethroat, White-browed (or Severtzov’s) Tit-Warbler, Red-billed and Yellow-billed Choughs, Red-fronted Serin, Grey-capped Goldfinch (sometimes split from European) and Common Rosefinch.

Overhead we may see Bearded Vulture (or Lammergeier), while the cliffs provide a habitat for Wallcreeper and on the scree slopes we might be lucky enough to encounter some shy Himalayan Snowcocks.

Around a cool mountain lake, we can find breeding Citrine Wagtails (of the black-backed form calcarata), and we may also come across Little Forktails bobbing about on the rocks in a rushing mountain river.

Northern Pakistan: Day 11  After spending much of the day in the Naltar valley, we will return to Gilgit for an overnight stay. Around Gilgit, we can expect to find Tickell’s Thrush, Eurasian Magpie and Indian Golden Oriole, with a chance of Mongolian Finch.

Northern Pakistan: Day 12  Today we set off early and head back to the Islamabad region for an overnight stay.

Northern Pakistan: Day 13  We will spend much of the day birding in the Himalayan foothills before dropping down to Islamabad for an overnight stay.