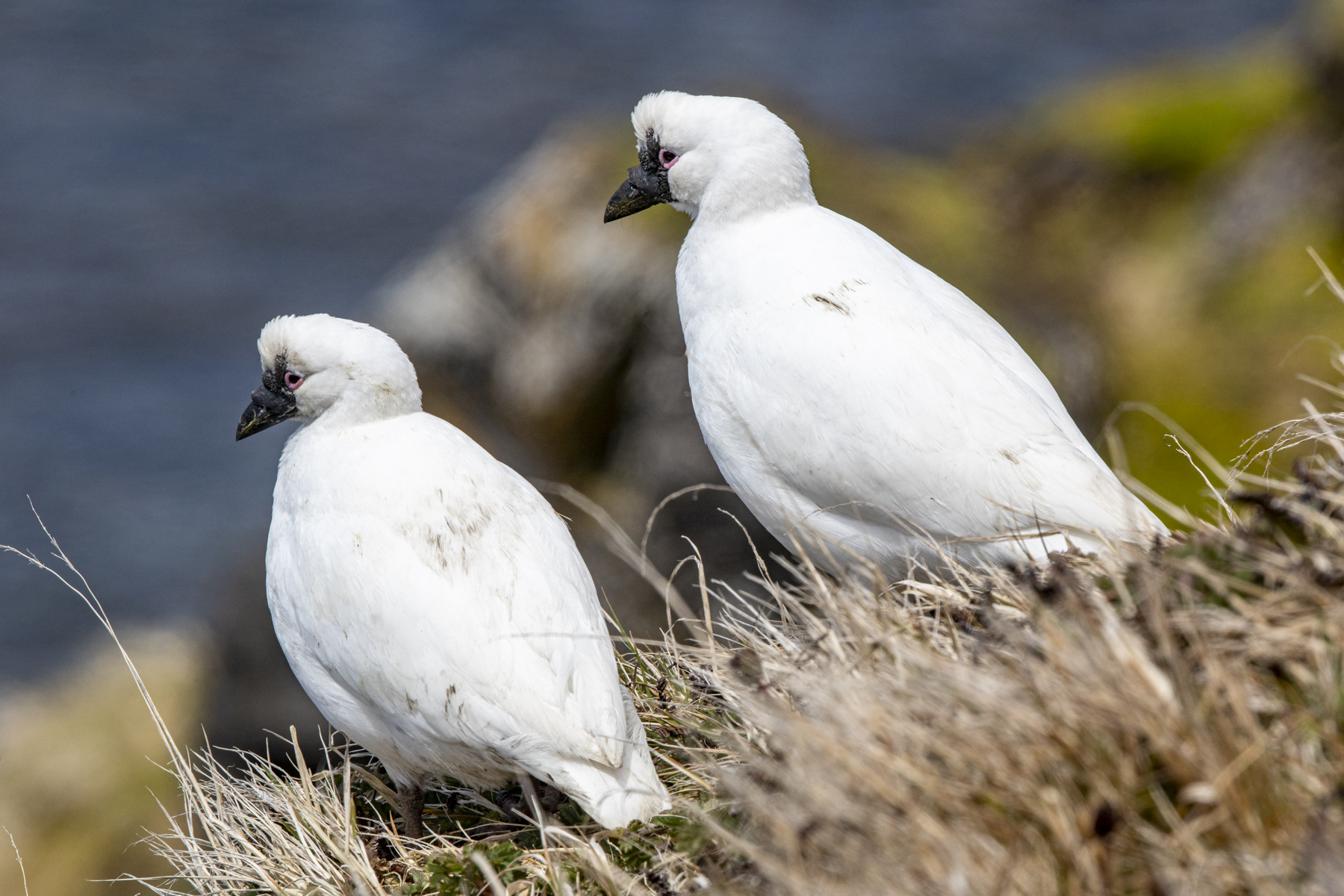 Birdquest’s French Subantarctic Islands of the Indian Ocean birding and wildlife watching tour is one of those rare adventures that are only on offer from time to time. Our French Subantarctic Islands of the Indian Ocean tour explores some of the most remote and least-visited islands on our planet (Kerguelen, Crozet, St Paul and Amsterdam), home to a series of rare seabirds and other endemic birds. Needless to say, pelagic seabirding is extraordinary.

In the vast expanses of the southern Indian Ocean, it is a rare chunk of land that interrupts this immense sweep of sea and wind. Far and few, far and few are the lands where the seabirds come to breed in this remote part of our planet, and far apart and very few in number are those who have ever set foot on them.

With the exception of St Paul and Amsterdam (which lie roughly at the halfway mark between the Cape of Good Hope and Australia, and which still host a French fishing industry, most of the few islands that exist are situated to the south of the shipping lanes, so Prince Edward, Marion, the Crozets, Kerguelen and Heard were rarely visited except by whalers, sealers and penguin-oil collectors, and later by small numbers of explorers and scientists.

Yet these tiny fragments of land, both because of their small size and the fact they represent the sole possible breeding places for seabirds in this immense yet rich expanse of ocean, teem with life, offering a home for millions of seabirds of a great variety of species, and including a series of rarely-observed endemics and restricted-range specialities.

Being so far from anywhere, and not on the now comparatively well-travelled routes between southernmost South America or New Zealand and Antarctica, they are very rarely visited even by expedition ships, and in fact, a cruise like this one (taking in the Crozets, Kerguelen, Amsterdam and St Paul, and thus almost all the regional specialities) represents a ‘once-in-a-lifetime’ opportunity for most people.

We start our epic journey on the French island of Réunion and from there sail southwards to the Crozet Islands, home to Indian Yellow-nosed and Light-mantled Albatrosses, the endemic Crozet Shag, the restricted-range Black-faced (or Lesser) Sheathbill and Kerguelen Tern, as well as King, Gentoo, Macaroni and Rockhopper Penguins, and large numbers of Antarctic Fur Seals and hulking Southern Elephant Seals.

Next, we explore Kerguelen Island, which lies far to the east of the Crozets. Discovered by Captain Yves Joseph de Kerguelen-Tremarec, who was searching for the supposed ‘Terra Australis’, this volcanic, plant-rich island is home to the endemic Eaton’s (or Kerguelen) Pintail and Kerguelen Shag, and the restricted-range Kerguelen Tern, while numerous other seabirds nest, including Kerguelen Petrel and Wandering Albatross.

The next leg of the voyage takes us northwards to St Paul and Amsterdam Islands, which hold a huge colony of Indian Yellow-nosed Albatrosses, the rare Amsterdam Albatross (that breeds only here), the beautiful Sooty Albatross, Antarctic Tern and many other seabirds.

All those days at sea will not be wasted either as we look for a fantastic collection of pelagics including Kerguelen, Barau’s and Réunion Petrels, St Paul, Salvin’s and Fulmar Prions, Flesh-footed Shearwater and White-bellied Storm-Petrel, to name just a few.

By the time we eventually return to Réunion, we will have joined a small band of birders who have explored these small but rich islands in the middle of a vast ocean.

Accommodation & Transport: We shall be sailing on a supply vessel for the research bases in the French Indian Ocean Territories. The ship, while surprisingly comfortable, is a fairly large cargo vessel and not a ‘cruise ship’ in the traditional manner and will appeal most to those for whom exploring wild places and enjoying wild nature is the prime attraction.

Cabins are furnished with two berths and have some storage space and an outside view (all have en-suite bathroom facilities). Public facilities include a restaurant and lounge/bar. Food is plentiful and of good quality, waiter-served and prepared by French chefs.

Landings are carried out by the ship’s helicopter: now that is something special!

Important: Owing to the possibility, however small, of a severe airline delay, we would recommend that all participants have at least one night in Réunion prior to the cruise. Kindly note that in the event you do not arrive in time, the ship will not wait and there will be no refund in such circumstances. Arriving early also has the advantage that your luggage could still catch up with you, should it go astray. We can make hotel bookings for you on request.

Walking: The walking effort is mostly easy, but there are a few optional harder walks.

Climate: Quite mild at this season. Temperatures range from cool to warm in the north of the subantarctic islands region and from cool to cold in the south (although even in the south it can feel relatively mild on a sunny day if there is no wind). It feels decidedly cold on windy days at sea in the far south, however! Sunny spells are interspersed with (often longer) overcast periods and some rain is to be expected.

Deposit: £270, $360, €300, AUD500. Please note that this deposit is additional to the tour cost shown below, not part of it. This deposit is refundable if you do not receive a place on the ship (see medical note below), but not for any other reason.

The tour cost will be due about 3 months before departure.

TO REGISTER YOUR INTEREST IN THIS TOUR: Please email the Birdquest office and tell us you want to go. Owing to the special and occasional nature of this expedition, and the rather few places available, only existing Birdquest clients can register.

Age Limit: The upper age limit for participation, set by the French authorities, is that you must be under 75 years old at the time of the voyage.

Medical & Physical Condition: As this expedition is on the French Subantarctic base resupply ship, not a cruise vessel, they are quite fussy about who they will take. No one with a heart or other serious health condition will receive approval and you will have to have a full medical checkup before being approved for travel. If you cannot get this from a state health service or on private medical insurance, you can expect it to be expensive.

Linguistic ability in French: This expedition is not like a standard expedition cruise. Most of the 100 plus passengers on board the supply ship will be scientists and French officials going to the bases on the islands. The language on board is French. Announcements, briefings, lectures, safety and helicopter drills etc are made in French, not in English. It is not possible to rely on the Birdquest leader. Please bear this in mind. Only those with basic French or better should consider participating. You will need to tell us your level of French at the time you register an interest in participating.

Dates and voyage duration are provisional and precise voyage dates are not confirmed until about 3 months before departure. The duration varies with the needs of the resupply schedule. Longer voyages tend to be those where there is a need to visit isolated substations in Kerguelen.

Single Accommodation: Is not available. All cabins are twin berth. A same-sex cabin-mate, if need be from outwith our group, will be provided.

This tour is priced in Euros. Amounts shown in other currencies are indicative.

Day 1  Board our ship at Réunion and set sail for the Subantarctic Islands. We will spend 30 nights on board.

Days 2-30  Sailing between, and exploring, the French Indian Ocean Territories, including Amsterdam, St Paul, Kerguelen and the Crozet Islands.

Day 31  Return to Réunion and disembark.